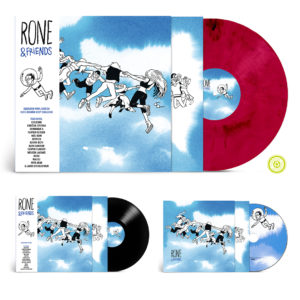 “Polichinelle” is one of the best kept secrets from Rone & Friends: a collaborative album that puts the voices of 14 guests back at the heart of the French electronic music producer’s productions (Out March 26)
→ Pre-order

Flavien Berger and Rone are two artists whose frames of reference overlap as much as they clash. The first brings back the sounds of electro-pop by drawing inspiration from the French pop songs of the 80’s as well as from contemporary electronic music producers, cultivating an *offbeat persona* that has made him a strong and singular personality in the French scene. The latter tends to focus on musical timelessness, with his head firmly on the ground when it comes to tackling themes such as “The End of the World”, his music for “Room with A View” stands out as a portal to the waking dream.

On “Polichinelle”, Berger, the genius hacker and surrealist poet derails the milky way of “Lucid Dream”, introducing the chimeras of Berghain and the comedy dell’Arte on the same deliciously psychedelic electronic backdrop. A subtle moment of uncontrolled bliss!

All the artworks were created by French illustrator and cartoonist Coco (who works at Charlie Hebdo) and continues, in its own way, the work initiated by Michel Gondry on the imaginary city of Mirapolis.

You can now pre-order the album on Bandcamp and Bigwax, out March 26th on Vinyl, CD & digital:

LIMITED EDITION
12″ Colored Edition* (100% recycled sleeve & vinyl)
+ 3 Risography printed drawings by Coco
*All vinyls are made from scraps of colored vinyl, each copy of this edition will have a different and unique color