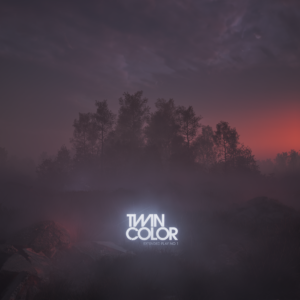 Murcof’s love of modular analogue synthesis, sonic world-building and studio experimentation makes an easy marriage with Geilfus’ graphically sculptured creative work. Twin Color offers a futurist nostalgia voiced in part by Murcof’s four-year-old daughter Alina and – at least for this debut EP – accompanied by the creation of a graphic world described by Murcof as “like a contemplative video game, a “playable” world where the “player” can explore and affect the music as they go along inside this virtual environment”.

Even consumed as a traditional EP release, Extended Play No 1 is just as
immersive and mesmerising as the video game and AR parallel universes that Murcof points to as influences: intensely coloured, grand and sweeping, growling with inherent darkness. Melodic lines eddy and whorl together while moonrays of Blade Runner synthesis shine brightly across the shadows.

At times it is stately in its melancholia, at others driving with the exhilarating rhythm of final boss levels. Murcof (Tijuana-born, Barcelona-residing Fernando Corona) writes that “I started working on Twin Color during the 1st wave of the pandemic, back in early/mid 2020. I was playing around in the studio trying to come up with some ideas for a possible new Murcof album. Those first sketches were a bit Murcofy, but very soon afterwards it became obvious this was something else and that indeed it required its own unique name.”

Inspired by the radio in the Tijuana and San Diego of Murcof’s youth – stations such as 91X (FM) and the Mighty 690 (AM) – as well as bands such as OMD, Depeche Mode, Thompson Twins, Book of Love, Ultravox, Murcof took this longing nostalgia (noting, also, that during the pandemic he hit the milestone of turning 50) and married it with his own future-facing sound design and compositional style. These studio experiments were closely bound to his young daughter’s emerging musicality:

“Alina was visiting me quite regularly in the studio. I began recording our little jam sessions just for funand perhaps also as a way of showing her some of the sound manipulation possibilities on the computer. But later, when I was again on my own working on the music, I thought I would give some of the more melodic bits of her voice a try on the demos I was making, time stretching, formant shifting and autotuning it as I went along.”

Having met Simon Geilfus at Manchester’s Futuresonic festival in 2009, collaborating on visual accompaniment to a performance of Murcof’s Cosmos album, the pair performed together throughout mid 2010’s, in Europe, China, USA, Mexico, Canada, and Russia. Though this collaboration was a very different project to Twin Color – a straighter live A/V show – the creative groundwork for Extended Play N°1 was already seeded. Murcof invited Geilfus to create visuals for Twin Color as the demos began to take shape. The duo opted to employ the graphics software Unreal Engine 5 to create a virtual universe to house the music of Extended Play N°1: while Geilfus is now working to expand the engine’s capabilities through C++ programming to fit the needs of the project more precisely, Murcof is using the Metasounds audio system (part of Unreal Engine) to mirror and match Simon’s creative tech advances.