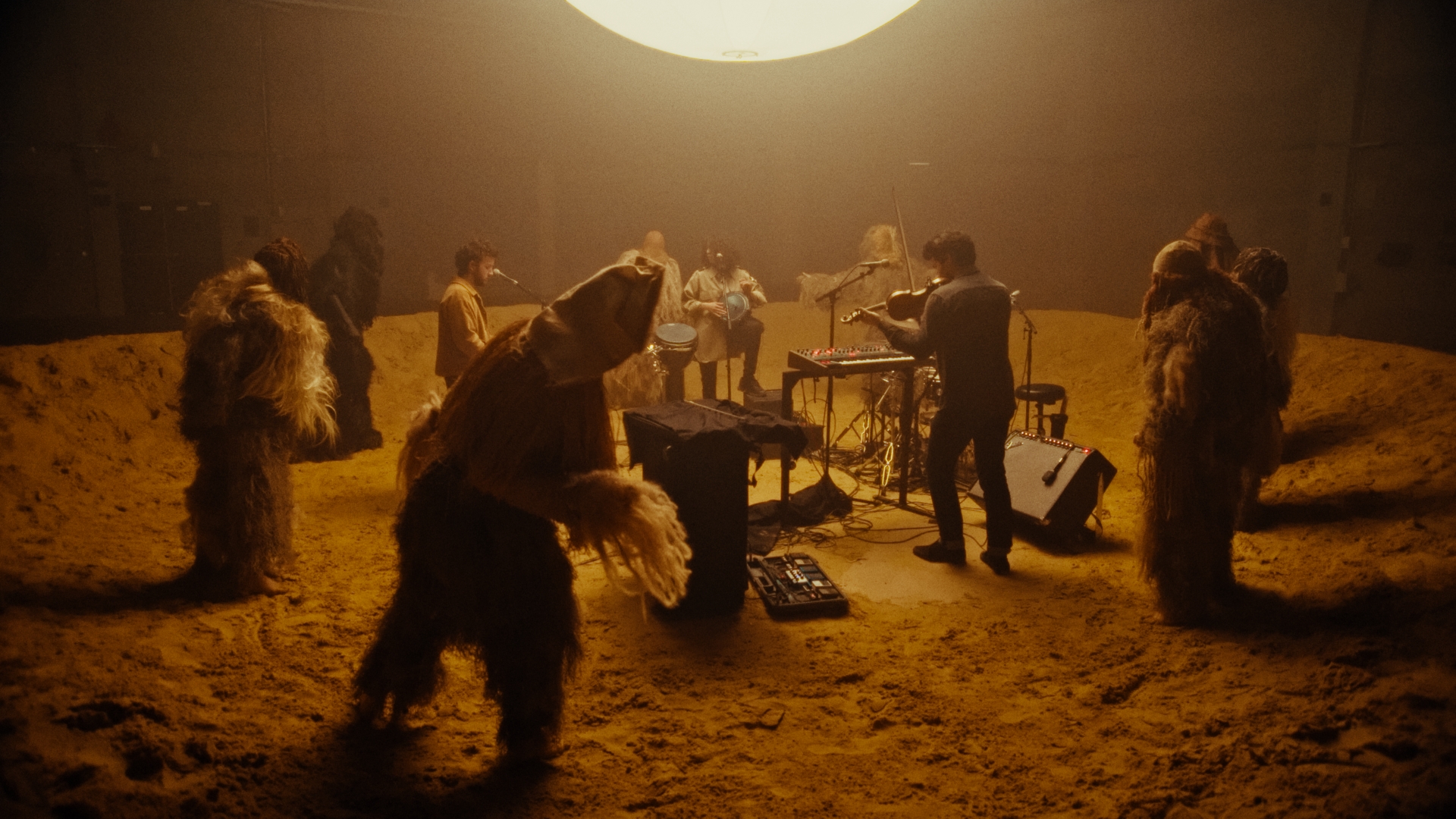 In the centre of a crater surrounded by a strange world, the artist and her musicians perform in a space without geometry : the surrealist universe of Léonie and her latest eponymous album → Watch the full video

Directed by Antoine Carlier
Produced by Walter Films for Culturebox

Le Cirque de Consolation is a live performance by Léonie Pernet. In the form of an installation in which the circus is first of all a natural caldera, a crater resulting from who knows from who knows what collision with a meteorite…

Around this sort of musical flying saucer floating without reference points, the spectator is not constrained to any predetermined place, in the void of all its angles… However, behind the circular embankment bordering the stage, forms move in primitive trances, approaching, dancing, disappearing.

Like Patti Smith’s poems from the 70’s, Laurie Anderson’s adventures from the 80’s or more recently Godspeed You Black Emperor’s sessions, Léonie Pernet is part of a family of artists where music becomes a performance, where each track is a musical essay.
With Le Cirque de Consolation, the word
“experience” takes on its full meaning.

Firstly for the spectator-listener, confronted with tones, rhythms, unusual timbre and unspeakable emotion, but also for the experimental research of Léonie’s sounds, which are not content with any model. Thus, this film suggests a global immersion, much more than the simple frontal restitution of a concert, by prolonging the multiple ambiences of Léonie in a crater floating in the psyche of her titles, the film thus becoming the object of her performance.

The artists are arranged in the centre of a caldera whose horizon reveals forms, beings, lights, a choreography of signs, strange costumes sometimes evolving as far as the embankment at the edge of the play circus. The musicians themselves sometimes  venture up the ‘hill’ and dominate the full-length space surrounding the dunes

This unreal amphitheatre takes the form of a circus ring, and even a crater. But the film does not stay outside and an intrusive camera gets as close as possible to the artists. Thus the spectator enters in Le Cirque de Consolation, as if in a face to face with Léonie’s hypnotic reveries…

It is with these words that Léonie Pernet answers when asked what idea underlies this fictional place where she invites us to join her, Le Cirque de Consolation.
Léonie lifts the veil on her voice, more moving than ever, and offers us songs with racy and generous lyrics. 11 tracks, including 3 instrumental ones, conversing in directions
as rich as they are varied. African and oriental percussion, synthesizers, rhythm boxes and drums Léonie mixes genres and instruments with great ease.

From ‘Hard Billy’, a techno-influenced rebel anthem, to ‘Les Chants de Maldoror’, a club and dance song carried by feverish derboukas, to the deeply moving ‘À rebours’ and its Afro-electronic rocker, not forgetting the very catchy ‘Il pleut des hommes‘ ‘under Gainsbourg influence…

Léonie Pernet inhabits borders with insolence and imposes her unique and singular style. The producer questions the links between pop music, African cultures and electronic music (Intérieur Négro), neo-classical music (Le Cirque de Consolation, Dandelion), or the place of the voice, whether human or synthetic as in the atmospheric Vowel.

The voice, because it is by affirming her own that the young thirty-year-old reveals her flaws, but also her “deep hope“. Body and gender, addiction, racism, the fragility of our lives, but also love are all themes that run through Le Cirque de Consolation. and its solar melancholy.

In the eponymous title, Léonie asks us a question and sings a proposal that we can only guess at. and sings a proposition that we can guess is essential to the pursuit of her personal and artistic path Will you hear me this time lulling our illusions into the light / Will you be with me in the in the circus of consolation?